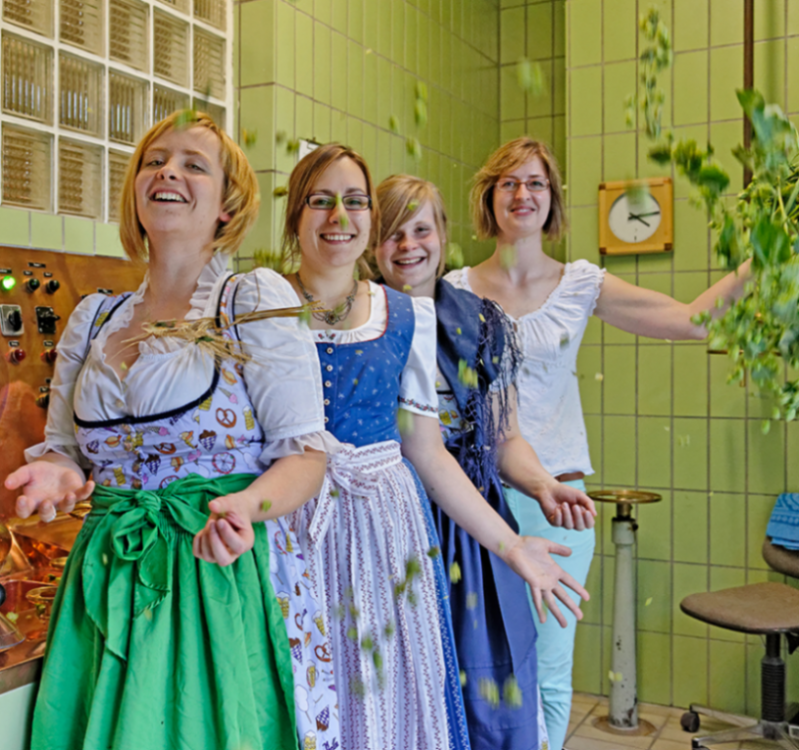 Pulling Back the Curtain on Women Brewers
. AS IN THE U.S. the brewing industry in Germany has a gender problem, or — to be more precise — it’s dominated by men, with women in a supporting role usually as big-boobed models in beer ads, waitresses at the Oktoberfest or designated drivers. Despite the stereotypes, women brewers in Bavaria are turning heads and making waves.
With a few exceptions, female beer-makers operate under the radar. But Treasures of Europe has tracked down some of Bavaria’s top women brewers for the fall tour. You’ll get a chance to hear their stories and taste their brews on the road with us this October. Here’s a peek at four of them.

Do Girls Just Want to Have Fun? Well, yes. But these ladies are also dead serious about their beer. Gisela and Monika Meinel-Hansen (Gisi und Moni) are the thirteenth generation of brewers in their family. They are genetically hardwired to brew beer, and the heavy weight of tradition bears down on them, but that hasn’t stopped them and two other lady brewers in the region from making waves with a new line of beer for women.

Shirley Temple beers these are not. Flouting the notion that women will only drink sweet, thin girly beers, their brews are headier and have more alcohol. They work as an aperitif, with food, as a digestif or in stand-alone mode.
The Meinels are definitely bro-friendly and so are their beers. The goal is not to typecast or segregate women beer drinkers, but to make beer more inclusive and widen its appeal with more sophisticated choices. After all, women have more taste buds than men, the better to detect shadings and nuance. In any case, the Meinels and their co-conspirators are here to stay.”We’re doing this because of our convictions, not because some marketing department told us to do it, ” they say.
Sudsiness is next to Godliness: Sister Doris
On Sudtag, the day she brews, Sister Doris is up before most of the other nuns. She’s excused from the obligatory morning prayer and is at the abbey brewhouse by 3:30 AM, working on another batch of her ambrosial, copper-toned Lager. It’s the stuff of gods — literally.
Sister Doris is the last beer-brewing nun in Germany — maybe in all of Europe. She doesn’t let her cult status go to her head and maintains an earthy, no-nonsense approach to beer and brewing that is refreshing. After 20+ years at the mash tun, her enthusiasm hasn’t flagged. A malty blanket hangs in the air over the brewhouse. “The smell is fantastic — just right. It doesn’t get any better!” she crows.
The brews Sister Doris turns out are fresh and unpasteurized — and they’re made to be consumed locally. Good thing, because you can’t find her beer outside a few-mile radius of the abbey. “If beer is processed too much, it affects the taste,” she said, referring to the beers in Munich that she says all taste alike. Photos of Sister Doris and the Mallersdorf Abbey Brewery.

Back when Sigi Friedmann stepped into her father’s shoes and took over the 140-year-old family brewery, things were different.

When Sigi answered the phone and a caller asked for the boss, she said “That’s me.” Then came the answer, “Then I’d like to speak with the brewmaster.” “That’s me, too,” she replied. The caller hung up.
Not untypical for the times, but Sigi was determined and has made a name for herself. She’s reinvigorated the family brewery
and won a loyal following with her Festbier, an uncharacteristic Pils, a Landbier and “Sigi’s Lager,” landing a European Beer Star Award in the process.

Sigi and her daughter Barbara, who will take over the reins in the future, keep up with the times and have modernized, but they’re “Slow Brewers” at heart. Their beer is rooted in the region and they don’t cut corners. They still use malt and hops from small growers in the area although these cost more. They also insist on open fermentation, which corporate brewers abandoned years ago because it’s more labor-intensive. Brewing is a a labor of love for the Friedmann ladies.  Back to the main Beer Tour page.

Read about us in USA Today, Country Living magazine, Australian House and Garden and The Philadelphia Inquirer…

Be an Early Bird
Share and Save
Solo-Friendly Travel
Groups