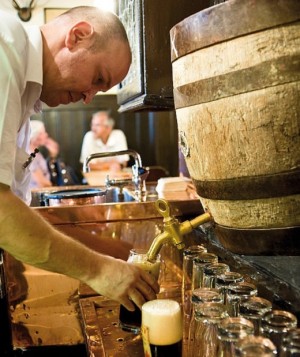 Chasing Delicious on the Beer Trail

IMMERSE YOURSELF in the delicious comforts of luscious beer and memorable food. Revel in dazzling scenery, history and culture. Get to know fascinating people and enjoy good times on the beer trail. Click the tabs below to see the day-by-day itinerary.

Off and Running: The Start of an Unforgettable Study Tour

Rendezvous at Frankfurt airport. Then wend your way southward to Bavaria to Miltenberg, a town of the Main River. We’ll kick off the tour with a welcome hosted by the Bavarian Association of Private Breweries at a family-owned brewery and local restaurant. An official from the Association will be on hand to greet the group and tell us about their work.  We will be the guests of the Association for lunch. The afternoon will continue with a behind-the-scenes look at the brewery led by one of Germany’s most accomplished new craft brewsters. Next stop: a medieval castled near the Romantic Road, where we’ll spend the night.

Rocking Out at the Kirchweih Festival in Spalt

After a secret morning adventure, we’ll visit Spalt, which, as all beer wonks know, is the region where some of Germany’s best hops come from. We’ll spend the day as the guests of the town —  local officials graciously offered to put together a plan for our visit and will host the group. Major folk awesomeness awaits you as part of Spalt’s traditional Franconian Kirchweih festival, with a decorated may pole, dancing, local music, piles of food and lots of beer. We’ll start the visit with a welcome, then witness the Kirchweih kick-off parade, continue with a tour through the hops museum and enjoy a tasting, including the local limited-edition festival brew. Then it’s Party Time, with two local bands. You’ll eexperience a slice of local life and culture that most visitors never have a chance to experience.

Small-Scale Craft  Beer and Hops Awesomeness in the Hallertau

Enjoy a yeoman breakfast at the hotel and then we’re off to Germany’s other fabled (and biggest) hops districts, the Hallertau. Time permitting, we’ll visit a castle brewery. With the support of Sam Adams/Boston Beer senior brewer (and Pink Boots member) Jennifer Glanville and Barth-Haas, the Stanglmair family will host us for a private tour, briefing and tasting at their hops farm, which dates back to the Middle Ages. An expert from Barth-Haas will also help with the presentation. You’ll hear about trends, get an insider’s look at the selection process and be able to chill over a sampling of regional beers. Close out the day with a spread hosted by Boston Beer.

Scheyern Abbey, home of one of Germany’s lesser-known monastic brewing operations will be our first visit of the day, followed by CREW Republic brewery, located north of Munich, which is rocking the German beer space and setting new standards for craft beer in the country. Our current planning includes a visit to CREW and a chance to meet the owners. After a private briefing by one of the leading lights at Weihenstephan, the “Harvard of Brewing” we’re off to Munich for an afternoon of freestyling in this beautiful, invigorating city. Explore Munich on your own by foot. For the art-interested, we recommend one of the city’s stellar museums, such as the Lenbachhaus, Neue Pinakothek or the Alte Pinakothek. Learn about the rise of the Nazi movement and life in the city under Hitler at The Munich City Museum. There are many other options, too. We’ll help you find one you like. Time permitting, you should stop at the outdoor “Victuals Market” (Viktualienmarkt) where you can compose your own Slow Food picnic from local and regional farm products, fruit, charcuterie, regional cheeses and sausage. Say Auf Wiedersehen to Munich in the late afternoon. Spend the night at an abbey north of Munich.

We’ll be hosted by the owners of one of Bavaria’s back-country Weissbier breweries, three sisters who are making a name for themselves in the beer industry.  Learn, sample, ask questions, engage and be amazed! Afterwards, we’re off to Neufahrn in central Bavaria.

A short ride to Mallersdorf Abbey in the Bavarian hinterlands. You’ll be spending the morning with Sister Doris, the last beer-brewing nun in Germany. This lady rocks! Hear her stories, experience the brewery where she holds forth and sample the marvelous beer she produces for the nuns, visitors and a few lucky taps in the surrounding towns and villages. Wheat beer lovers will be in their element at Schneider Weisse, in Kelheim, which is our next stop. We will be greeted by Pink Boots supporter Susanne Hecht from Scheider’s management, who will walk us through a private tasting of Schneider’s top treasures, including some new craft beers. Get ready for some serious Danube awesomeness on the way to the inn where we’re staying tonight.

Weltenburg  Abbey and Franconia, the Beer Mecca of Germany

Pinch yourself: You’re spending the first part of the day in a monastery dating back to 1050 with the oldest abbey brewery in the world! After a private tour and sampling we’re off to the hinterlands of eastern Bavaria, in the Palatinate region, to see what makes the Nittenau Brewery tick and meet the owner, who has pioneered a raft of new brews. From there, we’ll wend our way to Upper Franconia, in northern Bavaria. If the followers of Islam have Mecca, the Lutherans have Wittenberg and Catholics have the Vatican, then beer connoisseurs have Franconia. Until the early 19th century, it was a separate principality made up of duchies, church-controlled lands and free city-states. The people of Franconia are warm and welcoming — and they take their beer very seriously, which is why so many private, family-operated breweries are still operating there. We’ll visit some of the best of these small breweries during the rest of the study tour. The afternoon and evening are yours to explore the delights of Bamberg.

Freestyling in Bamberg, Home of Rauchbier, and the Bratwurst King of Bavaria

Bamberg is your oyster! Time permitting, we will try to arrange private visits to two innovative breweries, but we don’t want to eat into your free time too much. Around mid-day you’ll switch gears from beer to food with a visit to master butcher Jürgen Reck, who was chosen Franconia’s “King of Bratwurst” in a serious competition, dubbed the Bratwurst Summit, that is held every year. If beer is the national drink of Franconia, Bratwurst is the national dish. Reck has elevated Bratwurst making to a high art form. In addition to Brats, Reck turns out a range of Slow Food-worthy hand-crafted charcuterie, fresh and smoked meat, other sausage and Franconian specialties. He’ll give us a close-up look at the family-owned butchery. We’ll also have our own Bratwurst Workshop, followed by a meal. Use the balance of the evening to crawl Bamberg’s breweries and pubs and historical attractions at your own pace. Sample and swoon!

Bamberg in the Morning, Then a Pilgrimage to Zoigl Country

SYou’ll have a chance to freestyle in Bamberg and visit the town’s brewery museum in the morning, followed by a trip to the nearby Weissenohe Abbey Brewery. We’ll be hosted by the master brewer-owner, who is one of Germany’s great innovators. Then we’re off to Zoigl Country, in the Upper Palatinate district, to sample hyper-local, communally-produced beers and learn about this distinctive brewing tradition.[/typography]
A Sesh with the Meinel Sisters, Hof’s  Pioneering Lady Brewers About an hour away from Bamberg is the city of Hof, where a dynamic team of sisters Gisi and Moni Meinel have unleashed a revolution with a new line of craft beers for women. The sisters are reaching out to women, but it’s not a girls-only movement — the new beers are for everybody. It’s not a spoof. It’s not a marketing ploy and it’s totally snark-free. The Meinels and their co-conspirators Yvonne Wernlein and Isabella Straub, are dead-serious, highly skilled and they know what they’re doing. They’re turning out intuitive beers with character that work as an aperitif, digestif or as a contemplative slow draw for a special evening. New batches sell out quickly. After a tour, briefing and lunch, we’ll wend our way westward to the Frankfurt area for the last night of the trip. We’ll stay at an inn withing striking distance of Frankfurt Airport tonight.[/typography]
Auf Wiedersehen!
We’ll gather for our last German breakfast at the hotel this morning, then it’s off to the airport and a round of farewells. The trip to the the airport is included in the program and we’ll be sure to get you there in time for your flight. Gute Reise! / Bon Voyage! / Happy Trails!

Back to the main Beer Tour page.

Read about us in USA Today, Country Living magazine, Australian House and Garden and The Philadelphia Inquirer…

Be an Early Bird
Share and Save
Solo-Friendly Travel
Groups